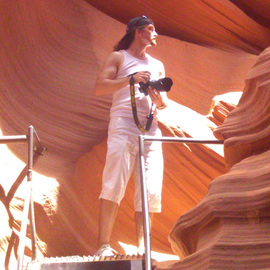 Angkor Wat or Angkor Wat ប្រាសាទអង្គរវត្ត ("Prasat Angkor Wat") is the largest temples of the monumental complex of Angkor in Cambodia. It was built by Suryavarman II in the early twelfth century as a "state temple" and capital. The best preserved temple in Angkor, one of the largest medieval cities in the world, it is the only one to have remained an important religious center since its founding, originally Hindu and dedicated to Vishnu, then, Buddhist.

The temple is the archetype of the classical style of Khmer architecture. He has become the symbol of Cambodia and is on his national flag. It is the main tourist place of the country.

Angkor Wat combines two bases of Khmer architecture for temples: the temple-mountain side and the temple temple side. It is designed to represent Mount Meru, the home of the gods in Hindu mythology.

Inside a moat and an outer wall 3.6 km long are three rectangular galleries, each built inside the other. In the center of the temple stand towers in staggered rows. Unlike most Angkor temples, Angkor Wat is oriented to the west, probably because it is oriented towards Vishnu.

The temple is admired for the grandeur and harmony of its architecture and the many bas-reliefs adorning its walls. Its beauty and size are such that many consider it the eighth wonder of the world. It also gives clues about the important hydraulic system of Angkor. It is a UNESCO World Heritage Site.

Vista360.cl
Santiago over the Clouds, Chile

Jeffrey Martin
Yick Fat Building - Courtyard 1
More About Cambodia
The World : Asia : Cambodia
✖ It looks like you’re creating an order.
If you have any questions before you checkout, just let us know at info@360cities.net and we’ll get right back to you.
Cookies help us deliver great service to you. By using this site, you agree to the use of cookies. Leave this Site