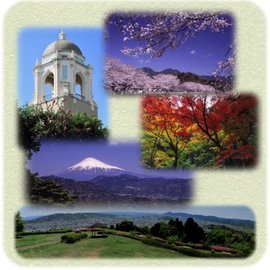 Sentence below is reproduction from Kinomiya Shrine's brochure.

The ancient people of Japan believed that gods dwelled in large natural formations, such as large trees, rocks, and waterfalls, and performed rituals in front of these natural formations, gibing their thanks and prayers. This was called the HimorogiIwasaka faith. As time progressed, and the culture of buildings advanced, it is believed that the modern shrine came into existence, with shrine pavilions and Torii gates being constructed. Kinomiya Shrine , located in Atami, was known as "Kinomiya Myojin" until the end of the Edo period, and was written as "木 Ki(tree)" in ancient texts as opposed to the current "来 Ki(come)". The shrine was revered as a place to worship the gods that dwelled in the trees, and nurtured a faith for giving thanks to the trees, which were a crucial part of ancient lifestyle and culture.

In the past, lightning struck the trees, and in particular, the "2nd Ookusu"tree(2nd Big Camphor Laurel) is believed to be mostly hollow. However, throughout the year, the camphor trees become lush with leaves, and given the fact that even today the tree is still growing, the tree is believed to have tremendous vitality. Based on the people's wishes to have the tree's vitality rub off on them, the tree has been worshipped as a Sacred Tree that grants health and longevity, and grants wishes.