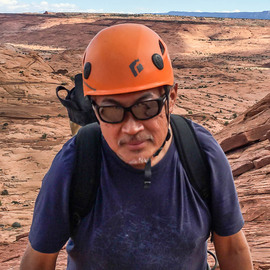 A short hike from Mount Wilson on the Rim Trail will take you to Newcomb Pass. This trail links Newcomb Pass-Gabrieleno Trail to the Rincon Red Box Road. Often in May and June the slopes of the San Gabriel Mountains are shrouded in clouds except for the higher peaks.