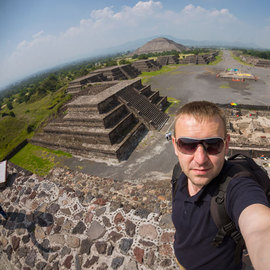 The Sviatohirsk Lavra or the Sviatohirsk Cave Monastery (Ukrainian: Свято-Успенська Святогірська Лавра) is a historic Orthodox Christian monastery (a lavra) near the city of Sviatohirsk in Donetsk Oblast (province) of eastern Ukraine. The lavra is located on the right bank of the Seversky Donets River. The name comes from the hill on which it sits—Sviatohirsk or Holy Hill.

In 1787, the government of Catherine II had paid for the restoration of the monastery. In 1844, it was once again restored, paid for by monetary donations from Aleksander Mikhailovich Potemkin and his wife Tatiana Borisovna. During the next seventy years until 1914, the monastery was one of the most important monasteries of the Russian Empire. In 1922, the monastery was rebuilt and converted into a residence.

Before its destruction, the Sviatohirsk Lavra complex consisted of: a worker's shop, windmills, various kinds of repair shops, and trading buildings. The lavra's main Dormition Cathedral was designed by Alexey Gornostaev, who included a traditional Byzantine tower.

Akiyoshi Odagawa
Mokumoku Wakuwaku Yokohama Yo Yo
More About Ukraine
The World : Europe : Ukraine
✖ It looks like you’re creating an order.
If you have any questions before you checkout, just let us know at info@360cities.net and we’ll get right back to you.
Cookies help us deliver great service to you. By using this site, you agree to the use of cookies. Leave this Site