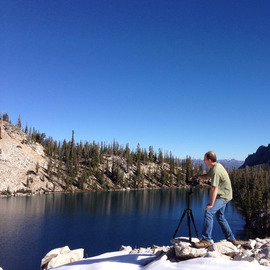 Swan Falls Dam is a concrete dam on the Snake River in Idaho, USA.  It is near Kuna and Murphy, Idaho.  The dam was built in 1900-1901 as a hydro-electrical power plant, originally to service the booming mining town of Silver City 28 miles to the south.  It began operation on April 10, 1901.

Swan Falls is the oldest hydroelectric dam on the Snake River.  It is located at river-mile 458.  It was been upgraded a number of times and in 1994 the original power plant was converted to a museum and a new plant constructed - just beside the old one.  The new power plant generates about 25 times the power the original old plant did (900 KW vs 25,000 KW).  The dam and old power plant are listed in the National Register of Historic Places.

Today the site is owned and operated by Idaho Power Company (since 1916).  The site also serves as a day-use area for sportsmen and family outings.  A nice park with limited facilities is maintained for free general public use by Idaho Power.

Shortly after Swan Falls was completed the site owners began a ferry service across the reservoir created by the dam.  It was the only ferry on the river ever powered by electricity.  Power cables hung over the reservoir to power the ferry much like an electric train is powered.  The ferry remained in use until the 1930's.  Most of the infrastructure for the ferry has since been removed.

It's not certain where the name "Swan" came from.  Two popular stories suggest that it either came from a Trumpeter Swan that wintered in the area or from an old prospector who resided in the area named Swan.

Idaho is a state located in the northwestern region of the United States of America.  Idaho is the 14th largest state by area, ranks 39th by population and 53rd by population density of the 50 United States.  Idaho was the 43rd state to be admitted into the Union, on July 3, 1890.  Idaho is landlocked, being bordered by Canada on the north and the states of Washington and Oregon on the west, Nevada and Utah on the south and Montana and Wyoming on the east.  Idaho is nicknamed "The Gem State" because nearly every known gemstone is found within the state.  Idaho is also famous for producing about one third of all potatoes grown in the USA.  Idaho also hosts the largest barrel cheese factory in the world, producing 120K metric tons of cheese per year.  There is some ambiguity as to where the name "Idaho" came from, but it is generally believed to have simply been made up by George M. Willing.  There is a possibility it was derived from a Native American phrase.  Idaho is very mountainous and is a popular outing destination of the outdoorsman.  The state population was about 1.58M in July 2011 with 84% being Caucasian, 11.2% Hispanic and 1.1% Native American.  The state capital and largest city is Boise.Source: wikipedia