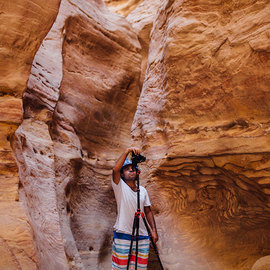 Queen Nefertari's tomb is located at Valley of the Queens on the West Bank of the Nile River in Luxor, Egypt. Discovered by Ernesto Schiaparelli in 1904, the tomb of Nefertari (QV66) is situated at the bottom of the north side of the main wadi in the Valley of the Queens. The limestone in the Theban area is not of very high quality and it is fractured by earthquakes; it also has bands of flint. All of this means that several layers of plaster were required to be applied to the walls before painting. Because of the many serious problems, which affected its beautifully painted walls, the tomb was closed to the public in the 1950's. Repairs had been carried out to try to stabilise the serious cracks in the plaster, of with large areas had completely broken away. But it wasn't until 1986 that the first serious modern work was carried out in order to stabilize the paintings, which was undertaken by the Getty Conservation Institute of America. Later, in February 1988, a full restoration started, preceded by various studies carried out by an international team of scientists. It was found that the main culprit for the damage was not ancient tomb robbers, but nature itself. Even here it was not earthquakes but salt which caused the problem. The local limestone contains salt, as did the mud from the Nile, used to make the plaster. The seepage of water through the rock created crystals, which caused the plaster to crack and the paint to flake. These crystals, which can grow extremely large, often to centimeters in size, have forced large areas of plaster from the walls, many of which it was impossible to restore. Even since the time of Schiaperelli's photography of the tomb, the effect of the destruction has been progressive, as best seen in a comparison of the condition after the recent conservation and a black and white photo taken by Schiaparelli. Earlier attempts at conservation were done by pasting large strips of paper or thick gauze over the cracks. These had a detrimental effect and had to be carefully removed, and the plaster and paint secured, using more modern techniques, before cleaning and final conservation work could be completed. The aim of the project was to stabilize and clean the tomb, not to restore it to its original state. Small missing areas were, however, filled with plaster. These were not painted to match the missing color, but were painted in "trattegio" (straight lines) to produce an almost identical match of color; water-based paint was used, for easy removal if at some future date it was found to be inappropriate. This, from a distance, gives the visual effect of solid color, but allows the area to be identified by future historians and conservators as not being the original. The conservation was completed in April 1992, but the tomb wasn't reopened to the public until November 1995. Admission was severely restricted, limiting the group size and number of daily visitors in order to try to preserve the fragile micro climatic. No form of photography was allowed. In January 2003 it was once again closed to the public. Even the limited number of tourists has an effect on the surface of the paintings. Their moist bacteria-laden breath causes mold to grow on the surface; the tomb is after all a closed environment. It opened again in 2016, but at a very restricted level.
Copyright: Mohamed Attef
Type: Spherical
Resolution: 10000x5000
Taken: 05/03/2021
Uploaded: 06/05/2022
Views: