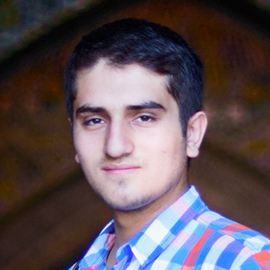 Ghalat mountain is located north west of Shiraz-fars province in Iran. The appearance is like the Rocky Mountains. Ghalat mountains have an almost red colour.

The height of mountains are almost 2888m. There are more than seven falls which some of them are seasonal falls. The height of falls almost goes to 50m to 100m and some of their names are Paye Takht (honour to coming king Mohammad Reza and Queen Farah to Ghalat and people made seat place near fall among rocks for them), Goreye Siyah, Tabgah, Sohonak, o ardbizak, nosare misho and Soley Shoparak (seasonal fall). Ghalat forest is the biggest natural forest park of Shiraz.

There are so many springs and rivers and have so many camping places like Paye Chenar, Shabshotori, Cheshme Aghaei, Gerdoshahri,......On the top of each fall there is a very beautiful small woodland.

Technical climbing is needed to climb and it's specially good for cliff hangers, but some easy ways allow access. Some parts like Koljoni near Goreye Siyah fall need technical experience to climb.

There is an ancient castle called Gezel Arsalan castle on the peak. Archaeologists can go there and search about its civilization. Ghalat village is an ancient village with 2500 years of history. Its houses are like stair way steps, so that the roof of one house is the yard of another. Another extraordinary thing is that village has ancient sewerage system from old era which is remained up to now. Passageways there in the village all covered by stone.

The village has an ancient church is called glory of Christ which is surrounded by charming gardens. Ghalat people resisted Mongol attacks in 1732 and because of that, King Nader of that time exempted Ghalat people from paying tax.

Jan Vrsinsky
Inside of Ruins of The Silver Mine

The Islamic Republic of Iran has been occupied since 4000BCE, making Iran home to the world's oldest continuous civilization.It is located in central Eurasia on two ancient trade routes. One runs North-South and connects the Caspian Sea to the Persian Gulf, the other one goes East-West between China, India, Europe and Africa.There's a city called Isfahan at the intersection of these two routes, which at one time was the wealthiest city in the world. Isfahan was twice the capital of the Persian Empire, during the Median and then Safavid Dynasties.Interesting artifacts from pre-Islamic Persia include the cylinder of Cyrus the Great, which is the world's first written declaration of human rights. The hanging gardens of Babylon (one of the seven wonders of the ancient world) and the Code of Hammurabi (a set of rules which outlast the King) are also on the list.The Persian Empire was so magnificent that returning Crusaders carried tales of its splendor and helped spark the Renaissance in Europe! Influence of the Zoroastrian teachings of equality also inspired Greek philosophers such as Aristotle and Socrates.The Persian Empire was conquered by Muslim Arabs around 650CE during the Sassanid Dynasty. Initially the Zoroastrian, Christian and Jewish faiths were tolerated but by 1000CE most Persians had accepted Islam.In the sixteenth century Shi'a Islam was declared in Isfahan to be the national religion of Persia and the second golden age began. From 1500 to 1720 the Safavid Dynasty built the greatest Iranian empire since before the Islamic conquest of Persia.Because of its strategic location and oil resources, World War I found Persia in the middle of conflicts between the Ottoman Empire, Russia and the British Empire-via-India. Persia became Iran as of 1935 and was ruled by the Shah, a Persian term for "monarch."In the Islamic Revolution of 1979 Iran re-established a theocratic government under the Ayatollah Khomeini.Today the capital of Iran is the city of Tehran, and Iran is known as the world's center of Shi'a Islam.Text by Steve Smith.