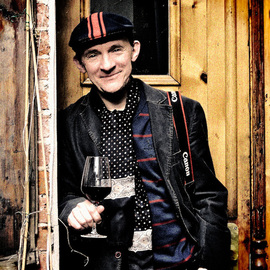 Love padlocks (also known as Love Locks) are custom-modified padlocks by which sweethearts affix padlocks to a fence or similar public fixture to symbolize their everlasting love. They are most commonly placed on the railings of bridges. In 2011, sweethearts began to affix their locks to the new pedestrian bridge in Lübeck, An der Obertrave, straight in front of the Musikhochschule. This bridge was, by the way, not yet shown (just as under construction) in Google Earth as for October 2011, so the location in the middle of the Trave river is okay, and the bridge is really existing - no rendering here. :)

For weeks, a dispute over the "Lübeck love bridge" was a tempered debate subject. Finally, an amicable solution has been found. Rather than attachning the padlocks to the stainless stee bridge railing, one should attach them in the future to the chains which were specially mounted on the bridge.

The mayor Mr. Bernd Saxe appealed to all romantics to apply their locks only to the chains. There, they established no harm, he said, stressing that the city had nothing against the love padlocks itself. "They were only removed because the metal has led to corrosion and the struts of the bridge railings were bent. "If the space provided is not enough, we will post more chains," Saxe promised.

✖ It looks like you’re creating an order.
If you have any questions before you checkout, just let us know at info@360cities.net and we’ll get right back to you.
Cookies hjälper oss att leverera bra service till dig. Genom att använda denna webbplats samtycker du till användning av cookies. Lämna denna siten