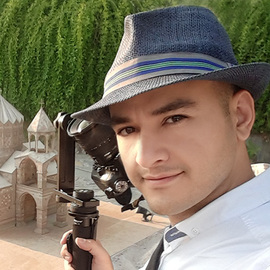 ln 1910 AD, Keikhosrow Shahrokh thought of building an Adrian in Tehran. At first, he talked about this idea with Bahrmjee Beikajee, one of the benevolent members of the Parsian community of India who was in Tehran at that time, This idea was welcomed when suggested in. india and by helps from Zoroastrians of Bombay it became possible to build Tehran's Adrian. In the 22' day of July, 1914,

Uie ceremony of putting its foundation stone was held by invitation of Aq I Mirzi Keikhosrow, the head

of the Zoroastrians Society of Tehran at that time, and attended by a large number of Zoroastrians.

However, some of those benevolent people in Tehran, because of ethnic prejudices and fanaticism,

stopped the flow of financial helps from India. And the building of Adrian was interrupted and remained

Adrian was opened in November 1917 AD.

and the expenses were paid by Mr. Fereydon Farahmand.

There is a hall in the western side of the Adrian, that was built in 1917 AD by Mirza Jamshid Mehraban

Kermni in memoriam of his wife, the late Sarvar Rostamshid, and in 1950 AD, Bahram Mehraban

Khodvandi paid the expenses of expanding this (western) hall in memoriam of his son, who had died

young, and in the same year another hall was built by Mirzi Jamashid Mehrab5n Kerm ini in memoriam

of Mirz Rostam Mehraban, who had died young.

The building of Tehran's Adrian has been registered in the list of Iran's National Monuments.