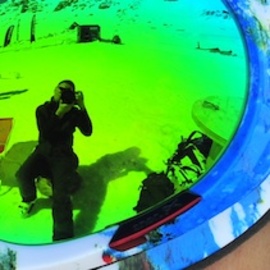 This Pano shows the view from Dachsrain above Aftersteg, Black Forest. The view goes to the South down to the Ski Lift, Aftersteg and Todtnau. To the South, behind Todtnau the Hasenhorn shows the Chairlift and Skiing Slopes. To the left Silberberg and Ahornbühl are visible. To the East the Tower of the Feldberg can bee seen. In front of the Feldberg the Skiing Slopes from Todtnauberg show up.

In Todtnau the oldest German Skiing Club was founded in 1891. So the Black Forest is the origin of the German Ski Sport. You can find here the longest Backcountry Skiing Ride in Germany down from the Belchen to the Wiesental.

In Todtnau the chairlift takes you up to the Hasenhorn form where a long steep skiing slope is open for freeriding and brings you back to the lift. In Summer the chairlift of the Hasenhorn gives access to the Bikepark Todtnau, with one of the best Downhill- and Freeride Mountain Bike Tracks in Germany. But also for Crosscountry Mountain Bicycling you can find perfect rides all over this region.

A bit to the east in the distance you can see the summit of the Silberberg with its former Skiing Slope leading down to Brandenberg. The Silberberg was the place, where in 1986 the International German Skiing Championships had their Downhill and SuperG Races. Up till today the Silberberg was a good location for Backcountry Skiing and Freeriding. But unfortunately since this winter 2011/2012 every form of backcountry skiing - not only in the region of the Silberberg, but all over the Southern Black Forest - is forbidden to save the quite large population of the Capercaillie Cock, Auerhahn (Tetrao urogallus). With the Snowshoes and on the Snowshoes Tracks it is still possible an allowed to go everywhere you like, but not with Skis.

Further to the east in the distance you see the slopes of the Ahornbühl with its famous FIS Slope at Fahl, where also in 1986 the Men's Giant Slalom took place. Not only this International Race took place there, but as well several World Cup Races. Ingemar Stenmark, the several time World Cup Champion, Olympic Champion and one of the best Skiers ever, once classified this slope as the most difficult Giant Slalom Course in the whole World Cup Tour.

To the east you see in the far distance the Tower of the Feldberg, which is not really placed on the summit of the Feldberg, but located next to the Seebuck. The Feldberg and Fahl offers a lot of Skiing Lifts and Skiing Slopes of all difficulties. From slopes for Children and Beginners to slopes like the already mentioned famous FIS Slope in Fahl. Arround the Feldberg you can find a lot of possiblities for Backcountry Skiing and Freeriding, but beware, that nobody see you, as from this winter 2011/2012 it is forbidden and you risk that your lift ticket can be withdrawn. So enjoy or get Snowshoes, with which you can go everywhere you like on the Snowshoetracks.

In front of the Feldberg you see the slopes of Todtnauberg - the Scheuermattkopflift. In Todtnauberg you have 5 Ski Lifts with a lot of Slopes and also the FIS Slope at the Stübenwasen Lift - here for example the Races of the Dompokal and Walter-Zimmermann-Pokal of the Palatine Skiing Association and the Ski Club Speyer take place as well as lots of ohter alpine Skiing Races - Slalom and Giant Slalom. In 1986 in the above mentioned International German Championship the Women's Giant Slalom races took place at the FIS Slope in Todtnauberg.

Coming back to our Viewpoint at Dachsrain above Aftersteg. To the North of our Position behind the Forests you can ski on the Slopes of Muggenbrunn with its 4 Ski Lifts. Form the top of Franzosenberglift - here the Women's Slalom Races took place in the Championship of 1986 - you reach our Position of the Dachsrain in some minutes of ski ride.

As you can imagine form the Pano and the given descriptions, this Region is a very good Place for Skiing on Slope but also a very good Place for lots of Tours in Backcountry Skiing. With this form of Skiing you are going back to the Roots of the Pioneers of Skiing in the Black Forest and the long Tradition of Backcountry Skiing in this part of Germany.

This being said it is almost not understandable, that today all Backcountry Skiing and Freeriding in this Region is forbidden and you also risk that your Lift Ticket is been withdrawn. This reminds of the Situation in Summer, when you are not allowed by law to ride with your bicycle or mountain bike on Tracks more narrow then 2 Meters all over The South West of Germany - Baden Württemberg. Nevertheless I recommend this Region and I enjoy it in Winter and in Summer...

Baden-Wuerttemberg is the most south west land of Germany