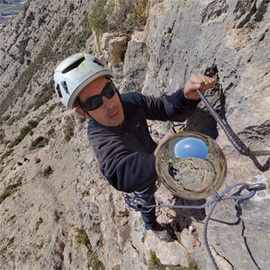 Queen Sofía Palace of the Arts is the final structure built of a grand City of Arts and Sciences concept designed by the Valencia-born and internationally known architect Santiago Calatrava, which began in 1995, and it was opened on 8 October 2005.

-The Sala Principal (Main Hall) seats 1,700 people and functions primarily for opera, but it may be converted for dance and other performing arts. The hall has four tiers of seating, a stage equipped with all major facilities, and the third largest orchestra pit in the world, being capable of housing 120 musicians.

-The Auditorium is located above the Main Hall. It seats 1,500 people and its facilities include sound and video systems capable of projecting displays of events taking place in venues below it. Officially given to the managing trust during the 2007–2008 season, it is a spectacular venue with multiple uses, from classical music concerts to political rallies.

-Aula Magistral is capable of seating 400 people and is used for chamber music performances and conferences.

-Martí i Soler Theatre was constructed below the base of the Palau's plume [4] and seats 400 people. It shall be used for theatre productions and as a training centre for the main auditoria. This hall suffered vast damage during the 2007 flooding and its opening was delayed. No equipment had been installed before the flooding, however, so the estimated cost for reconstruction was much lower than it would have been shortly thereafter. [edit]