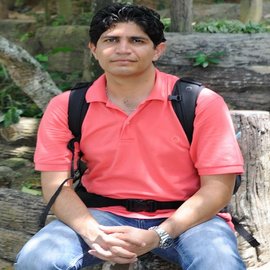 At the foot of Djebel Akhdar lie the fortresses of Rustaq to the north, and Izki, Nizwa and Bahla to the south. These have all been capitals at some time in their history, and as a consequence have played an important role in the history of Oman. It was here that the Kharijite communities resisted all attempts at 'normalization' by Caliph Harun Al-Rashid, and put into practice their religious concepts, which were at once radically puritanical and democratic.

Not far from the capital of Oman, the oasis of Bahla owed its prosperity to the Banu Nabhan who, from the mid-12th to the end of the 15th centuries, imposed their rule on the other tribes. Only the ruins of what was a glorious past now remain in this magnificent mountain site. Built on a stone base, the adobe walls and towers of the immense fort probably include some structural elements of the pre-Islamic period, but the major part of the constructions dates from the prosperous time of the Banu Nabhan, with the latest reconstruction dating from the beginning of the 16th century. At the foot of the fort, to the south-west, lies the Friday Mosque with its beautiful sculpted mihrab (prayer niche) probably dating back to the 14th century.