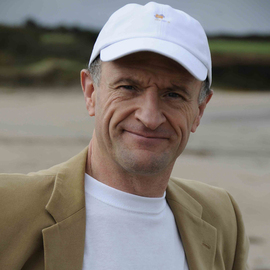 Bull’s Head Extract from The Dingle Peninsula by Steve MacDonagh. About three-quarters of a mile from Tobar Mhuire as the crow flies-but a longer walk over rough hillside- is the most substantial of all the promontory forts on the coast of Corca Dhuibhne, at Bull’s Head. Extraordinarily, this was only recognised as a fort as late as 1978, and yet it’s large defensive wall is visible from several miles away. A 656 feet (200 metres) long defensive wall, or series of walls, incorporating a large rock outcrop, cuts across the neck of the promontory, overlooking the landward approach. Within this enclosure is an area of about 1,150 feet(350 metres) by 1,050 feet (320 metres) which mostly consists of steeply sloping ground rising from cliffs. The defences of the fort have suffered considerable collapse and interference, and several sheepfolds have been built into their western end. Within the enclosure are at least 14 hut-sites, and a series of about 75 low, circular depressions which are between 3 feet (1 metre) and 16 feet (5 metres) in diameter. They encircle the three seaward sides of the upper slopes of the promontory and they do not appear to be hut-sites, but what they are, or were, no one seems to know. The best time to visit Bull’s Head is during the winter for bracken grows on all but the most exposed parts of the promontory, covering the enigmatic evidence. The slopes from the peak of 376 feet (115 metres) are steep and should be treated with extreme caution. North-east of the promontory are ruined clocháin, further signs that this bleak and deserted area was once the scene of some activity.

Bull’s Head An extract from Chorca Dhuibhne Archaeological Survey, Oidhreacht Chorca Dhuibhne. 271 DOONTIES COMMONE COIMÍN NA nDÚNTA Fig 60 Bull’s Head promontory is an extensive headland which projects SW into Dingle Bay. The interior rises steeply to a rocky ridge which extends NE-SW along the centre of the headland attaining a maximum height of 376 feet/115m. A complex series of walls, bunks and fosses occur about 100m E of the highest point, overlooking the landward approach to the site. These isolate an area roughly 350x320m in extent, consisting, for the most part of precipitous slopes rising from the sea cliffs. The defences have been traced for a distance of roughly 200m, and at the North end and continue downhill to the cliff edge: this final section could not be included on the plan due to its position on very steeply sloping ground. At their highest point a massive rock outcrop has been incorporated into the defences and the walls fall away downslope to either side of this. In general the defences consist of 3 or 4 lines of walls or banks separated by level spaces or slight fosses: these step gradually downhill to the exterior and are greatly confused by extensive collapse and more recent interference. Stones have been robbed to construct sheep-shelters along the inner and outer faces of the inner wall at its N end. Some of these were recorded on the 2nd edition of the OS map but the southernmost on the outside of the wall has been built within an earlier, roughly circular hut with an internal diameter of c.6.5m. Entrance gaps occur at 3 points along the defences. The 2 northernmost are now blocked by later walling but both appear to be original. Their drystone side walls are preserved in parts. The southernmost entrance does not break through the inner wall. A causeway crosses the 2 stony banks and fosses visible on the S side and extends only as far as the level berm which separates these from the inner wall in this section. Extending W from the walls along both sides of the central ridge and on its summit are at least 14 hut-sites. In plan these range from sub-rectangular through oval to circular, and they vary in internal diameter from2 to 6 m. They are enclosed by the low remains of the drystone walls or by stony banks, and many incorporate sections of the outcropping rock in their construction. Several of the structures are conjoined. In addition to these clearly-defined hut –sites, at least 75 depressions or hollows occur in a continuous and regular series on the 3 seaward sides of the promontory, along the upper edge of the steep scarp and cliffs. The depressions are excavated back into the sloping hillside and are no more than .75m deep. They vary from c. 1 to 5m in internal diameter and contain no traces of masonry. Two appear to have entrance gaps and enclosing banks. These latter may be ruined hut-sites, but in general the function of these features is unclear. Traces of a low stone wall skirt the seaward side of the NW series. A small number of similar features occur also in the promontory fort at Ballyoughteragh South (226)

Janne
Kurikka viewing platform, Finland
More About Ireland
The World : Europe : Ireland
✖ It looks like you’re creating an order.
If you have any questions before you checkout, just let us know at info@360cities.net and we’ll get right back to you.
Cookies help us deliver great service to you. By using this site, you agree to the use of cookies. Leave this Site