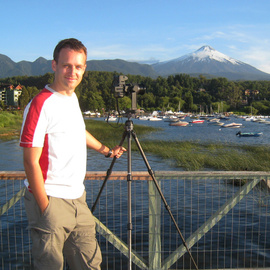 Cliff Palance is the largest cliff dwelling in America, once home to the Ancestral Puebloan people, and then left deserted for over700 years. It was rediscovered in 1888 almost completely in tact (as you see it here). It's still a mystery why the ancient people moved away from this area, but the most popular explanation is that a severe drought caused them to move to a different part of the country.

The Cliff Palace contains 23 kivas, one of which is clearly visible in this panorama. A Kiva is a circular room, built below the ground but would have once had a roof with a ladder for entry, and a hole for smoke to escape from a central fireplace. The kiva is the central living area for a family, and around it on the surface would be the rooms they lived in.

It's estimated that around 100 people lived in this small community, and there are around 150 rooms in total which would have had different uses including storage iof food stuffs like grains and corns.

The Mesa Verde National Park offers tours of the Cliff Palace which give you an insight into how people lived.

Some technical notes about this Panorama: This is my first HDR (High Dynamic Range) Panorama. The HDR technique is required because the inside of the cave is much much darker than the world outside. No one single expsure value would capture a suitable dynamic range.

To create this I took 3 photos of different exposure at each of the 18 angles required to capture the 360x180 degrees. I used PTGui to stitch all the photos, and it rendered an output of 3 complete panoramas with the different expsure values (dark, medium and light). I made some edits to the light image (which included the people that moved between frames), and finally merged the light and dark exposures with PTgui. It takes a lot longer than a normal panorama, and I'm sure there's a better workflow, but the results were worth it.