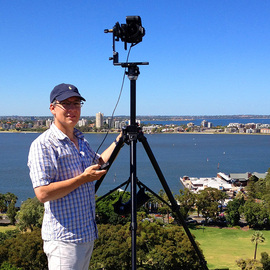 Shot in the main outdoor public plaza of Fed Square. Surrounded by the cafe's, bars and a large video screen. Finders Street Station, the tall Eureka Tower and St Paul's Cathedral are visible beyond the plaza.

Federation Square (also colloquially known as Fed Square) is a civic centre and cultural precinct in the city of Melbourne, Victoria, Australia. It was opened in 2002.

It is a mixed-use development covering an area of 3.2 hectares and centred around two major public spaces: open squares (St. Paul's Court and The Square) and one covered (The Atrium), built on top of a concrete deck above busy railway lines. It is located at intersection between Flinders Street and Swanston Street/St Kilda Road in Melbourne's Central Business District, and is adjacent to Melbourne's busiest railway station, Flinders Street Station.

Unlike many Australian landmarks, it was not opened by the Queen, nor was she invited to its unveiling. The Queen visited Federation Square in October 2011.

Eugen Festeu
Turda salt mine from above
More About City of Melbourne
The World : Australia : Victoria : City of Melbourne
✖ It looks like you’re creating an order.
If you have any questions before you checkout, just let us know at info@360cities.net and we’ll get right back to you.
Cookies help us deliver great service to you. By using this site, you agree to the use of cookies. Leave this Site