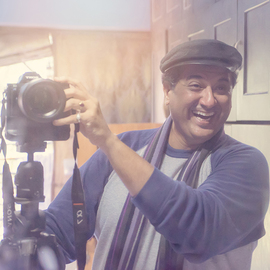 The Howrah Bridge is a Suspension type Balanced Cantilever bridge that spans the Hooghly River in West Bengal, India. Commissioned in 1943, the bridge was originally named the New Howrah Bridge, because it links the city of Howrah to its twin city, Kolkata (Calcutta).

On 14 June 1965 it was renamed Rabindra Setu, after the great Bengali poet Rabindranath Tagore who was the first Indian and Asian Nobel laureate. However it is still popularly known as the Howrah Bridge.

Apart from bearing the stormy weather of the Bay of Bengal region, it successfully bears the weight of a daily traffic of approximately 100,000 vehicles and possibly more than 150,000 pedestrians, easily making it the busiest cantilever bridge in the world. The third longest cantilever bridge at the time of its construction, it is currently the sixth longest bridge of its type in the world.

Panorama stitching was done in PTGui.

Removing of the tripod and VR Head from the bottom face was tedious and was done manually on PS to process the equirectangular panoramic.

Chebaldin Vladimir
Old "Colt" planes. Yalutorovsk Airfield.
More About India
The World : Asia : India
✖ It looks like you’re creating an order.
If you have any questions before you checkout, just let us know at info@360cities.net and we’ll get right back to you.
Cookies help us deliver great service to you. By using this site, you agree to the use of cookies. Leave this Site