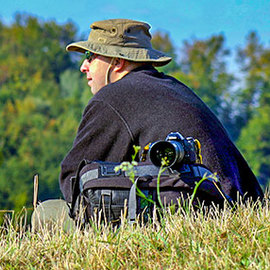 The church is situated on the river Uszwicą, outside the historic old city walls abroad Lipnica Murowana. The church was built probably in the late fifteenth century, the site of an earlier temple. However, according to local tradition it comes from the year 1143 or 1203 - this date can be read on the north-eastern wall of the chancel - and stands on the site of a former pagan gontyny.


We see today in an almost unchanged and the most valuable Gothic Polish wooden churches. It is a temple oriented, with timbered, bipartite. Is closed polygonal presbytery. The nave is wider, square shaped. In the seventeenth century the church was surrounded by landscaped Saturdays, at the time the signature was added. In the presbytery there is the sacristy, but probably once existed. The roof of the temple is jednokalenicowy, construction więźbowo-zaskrzynieniowej, shingled. According to ancient tradition, the windows are only on the south side and the front door to the south and west.
Statue with Światowit present behind the altar
View from the choir in the church. Leonard
Triptych of St. Leonard
Polychrome of the last supper

The interior is covered with encasements ceilings in the nave. On the ceiling is a polychrome patrons in the nave of the late fifteenth century, in the chancel of the sixteenth century. At zaskrzynieniach boards are decorated with motifs kasetownowych, made in the seventeenth century. The paintings in the chancel from 1689. At the closure of the Crucifixion is shown on the background draperies sustained by angels, on the north wall of the Last Judgement, on the southern image of the Last Supper and the Virgin Mary by St. adored. Simon of Lipnica. In the nave, the north wall, there is a polychrome of 1711. Decoration of the choir consists of having a popular expression of paintings depicting the Decalogue. In the church there were formerly three monumental triptychs. Were stolen in 1992, then recovered. However, it was decided to place them in the Diocesan Museum in Tarnow. Today in Lipnica can admire their copies. At the temple furnishings consist of:

copy of the triptych of Saint. Leonard from about 1500. In the mid-St. Leonard with shackles on his hands, St. And St. Lawrence. Florian. At the side wings are shown scenes from the life of St. Leonard and images of saints;
copy of the triptych of Saint. Nicholas from about 1530. In the mid-St. Nicholas, who offers three poor virgins dowry in the form of three golden balls;
copy of the triptych of the Adoration of the Infant Jesus, the end of the fifteenth century;
Passion group on the rood beam, which consists of a crucifix and a statue of Our Lady and St. John;
Baroque paintings on the south wall of the nave;
Gothic bas-relief of the Assumption of the Blessed Virgin Mary of the fourteenth century.

An interesting element is a beam supporting the back of the altar. Supposedly this is a long-standing sculpture Świętowit. The floor of the nave is a tombstone of Anthony Ledochowski, the father of the sisters Bl. Maria Theresa and Holy. Julia Maria.

The church was seriously damaged by the flood in 1997. Water podmyła foundation and then get into. Completely destroyed the crypt and found in her tomb. Temple rescued villagers, ropes attaching it to the mighty trees. After the flood recedes quickly proceeded to a thorough renovation. In 2003 the church became a UNESCO World Heritage Site.

More About Poland
The World : Europe : Poland
✖ It looks like you’re creating an order.
If you have any questions before you checkout, just let us know at info@360cities.net and we’ll get right back to you.