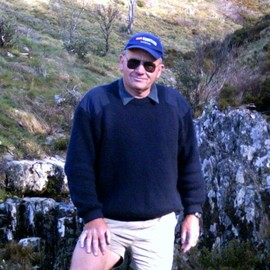 Access to the peaceful site on the banks of the Moroka river is by foot track.

Bill Gilleo and Andy Estoppey built this hut in 1946.

They were assisted by Eric Bateson and Arch Timbs.

Estoppey was still visiting the hut one year before his death in 1982 at the age of 76. He indicated great concern over the state of the hut and wished it to be restored. He was of Swiss descent.

Bob and Stan Dunsmir took over the leases through 1990s.

An earlier log hut existed on the site, built about 1900. It had log walls and a bark roof.

The first hut was a log cabin, as is this one, with some chocks and mud between the walls.

The new roof is iron and maltoid and felt is fitted in the ceiling.

The door was replaced in 1991, but much of the iron has rusted through.

In May 2012 the hut was refurbished as it had sustained significant damage to the chimney/fireplace, structural support poles and the saddle/wood shed at rear of hut.