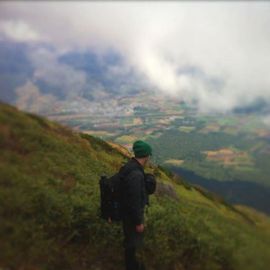 This pano was pretty memorable because it was the first time i realised that hiking in the early morning by yourself isn't a good idea because .... IN HOKKAIDO BEARS DO EXIST !!!!

I didn't actually see a bear but....hiking to the top of the Moiwa Ski field to try and take a few panos from the same spots i had taken them from a few months earlier in winter.

Problem # 1 i'd lost 4 meters elevation due to no snow pack.

Problem #2 pretty much everywhere was covered by at least 10 foot of sasa grass or a type of bamboo that covers pretty much the whole of Hokkaido making hiking impossible unless it is on a maintained trail.

So, i thought i'd have a go at following on of the wintertrails leading towards Annupuri from the top of Moiwa above the lift house. Pushing my way through the scrub after a few meters i hear what i thought was a group of hikers coming towards me. I called out hello ....ohayo gozaimasu - no response and the "footsteps" stopped. Sounded large and not that far away from me.

Surrounded by 10 foot sasa grass at 7:00 in the morning with no mobile compounded by the fact that i didn't tell anyone what i was going hiking the penny dropped and i realised that i was in a potentially baaaaaaaaad situation.

I stood my ground for a few mins whilst whistling from time to time and then slowly pushed my way backwards through the Sasa and after a while i heard something go the opposite direction quickly.

I didn't see anything and i could have been mistaken but it was pretty freaky. There are bears in the area i'm told especially at that time of the year. There are lots of do's and don't but basically - don't hike alone in bear country, attach a Bear Bell to your pack or clothing, take a mobile phone, let someone know you are going hiking and when you will be back and carry mace if you ever come face to face with a bear.

This pano was taken lower down below the lift house in the only spot i found that didn't have masses of sasa grass everywhere.

omid jafarnezhad
nakhjir cave
More About Hokkaido
The World : Asia : Japan : Hokkaido
✖ It looks like you’re creating an order.
If you have any questions before you checkout, just let us know at info@360cities.net and we’ll get right back to you.
Cookies help us deliver great service to you. By using this site, you agree to the use of cookies. Leave this Site