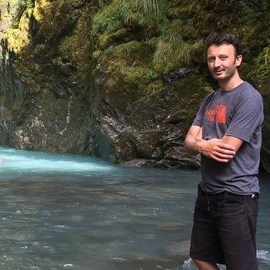 Construction of what was then known as the Port Augusta to Government Gums Railway began in 1878 when Premier of South Australia Sir William Jervois broke ground at Port Augusta. The 3 ft 6 in (1,067 mm) Cape gauge line reached Hawker in June 1880, Beltana in July 1881, Marree in January 1884 and Oodnadatta on 7 January 1891. It wasn't until 1926 that development to Alice Springs began, and that section was completed in 1929. Until then, final leg of the train journey was still made by camel.


While there were plans from the beginning to extend the line through to Darwin, by the time the Alice Springs connection was complete, the Ghan was running at a financial loss, and plans for connection to Darwin were put on indefinite hold. The original Ghan line followed the same track as the overland telegraph, which is believed to be the route taken by John McDouall Stuart during his 1862 crossing of Australia.

The original Ghan was notorious for washouts and other delays on the line, and the flatcar immediately behind the tender carried spare sleepers and railway tools, so that if a washout was encountered the passengers and crew could work as a railway gang to repair the line and permit the train to continue. This appalling service was tolerated because steam trains needed water, and Stuart's route to Alice Springs was the only one that had available water.

During World War 2 the service was greatly expanded, putting pressure on the limited water supplies. As a result, de-mineralisation towers were built along the track so that bore water could be used, and some survive to this day. When steam was replaced by diesel, there was no need for water, and the line was re-routed to the waterless (but more reliable) route from Tarcoola to Alice Springs.

The original Ghan featured in an episode of BBC Television's series Great Railway Journeys of the World in 1980, presented by Michael Frayn