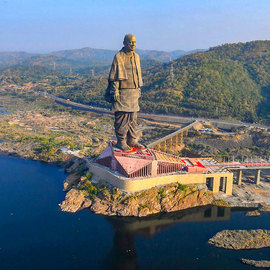 Dedicated to one of India’s founding fathers and the country’s first Deputy Prime Minister, the Statue of Unity is a tribute to the man who united India. It is the world’s tallest, grandest, giant and colossal statue of Indian statesman and independence activist sardar vallabhai patel. He was a political and social leader of India who played a major role in the country's struggle for independence. Sardar Vallabhbhai Patel, one of the most prominent leaders of the Indian independence movement and responsible for the unification of hundreds of princely states to form the modern political boundary of India.

Statue of Unity, the world’s highest statue is not only a tribute to the Iron Man of India, but also is the first such tourist attraction located in India and is termed ‘Pride of Nation’. It is located in the Narmada District of Gujarat, India. It is the world's tallest statue with a height of 182 metres (597 ft), taller than the 153 m tall Spring Temple Buddha in China and almost twice as tall as the world’s famous Statue of Liberty in New York.
This monument will not just be a mute memorial like the rest, but a fully functional, purpose-serving tribute that will spur all round socio-economic development. Sardar Vallabhbhai Patel was an important voice in the country’s freedom struggle. A sense of patriotism and united India is infused within the hearts of the people who visit the Statue of Unity or even have a glimpse of it!

The project was first announced in 2010 and the construction of statue started in October 2013 by Larsen & Toubro, who received the contract for ₹2,989 crore (US$420 million), statue of unity cost. It was designed by Indian sculptor Ram V. Sutar, and was inaugurated and unveiled by Indian Prime Minister Narendra Modi on 31 October 2018, the 143rd anniversary of Patel's birth. During the first 11 days of its opening, the monument has already been visited by around 1.3 lakh tourists. It is estimated that more than 10 Lakh tourists will visit the Statue of Unity every year. People can buy statue of unity tickets online.

The statue of Sardar Patel is more than just a memorial, it is all set to become country’s significant tourist attraction, stands as the Pride of Nation. Our Honourable Prime Minister of India, Shri Narendra Modi rightly said “The Statue will stand high, not just in meters and feet, but much more in terms of academic, historical, national and spiritual values. My vision is to develop the place as a source of inspiration for ages to come.”

Besides the statue itself, there are several other tourist attractions. For more information, click here!