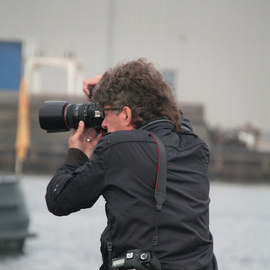 Albert Brunsting was born in 1954 in Ruinerwold and has turned his hobby in short time into his job. After high school in Meppel, he studied photography and audiovisual-design at the Art Academy in Breda. After graduating in 1981, he settled as an independent photographer and producer in his home village.
Brunsting has worked for large clients such as the Emmen Zoo and many other big companies. Besides photo-productions Albert Brunsting also produced a lot of video- and audiovisual production. Best known are the several productions in the Biochron of the Emmen Zoo on 3 screens with 9 slide projectors. For several clients many foreign trips were made.
Currently working for a very wide range of clients, for example in the agricultural-, care-, maritime- and service industry. More info about his work on: www.brunsting.nl and on Facebook.
In addition to photography, the production of video presentations are still an important part of his work, the many possibilities the new media offer, have broadened the scope of Albert Brunsting. In addition to linear video productions such as corporate presentations, clips and movies for internet, there are also opportunities for inter-active productions. But also the production of documentaries belong to his work, amongst others for the artists Thom Puckey and Kees Thijn.

In the remaining time there is sometimes sparse time for free work, mostly this concerns travel photography, the reason he visited several continents and many countries. In november 2008 he visited New Zealand for the first time. He was struck by the Green, the space and the peace. In his own words: ' it's like if you get in a time machine in New Zealand, back to the sixties: no stress, no overpopulation. Later there were several trips to New Zealand.

For those who love the technical specifications: Albert Brunsting photographs with the Canon Mark 1DX, the Canon Mark III DS, the Lumix GH5 and the Hasselblad H2D. The lenses that he uses: Canon 17 up to 200 mm. Video: Sony Sony PDW 700HD-XDCAM camera and Lumix GH5. Editing on Final Cut Pro. Also opportunities for 360 degree panoramic photography.