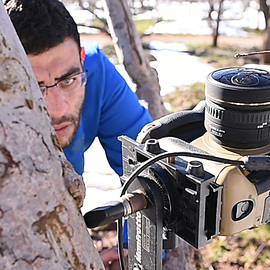 Alexy Joffre Frangieh is a Lebanese artist, who started exploring visual arts at an early age. He acquired considerable skills in electronic visual content creation. He later on saw the potential of Photography as a tool to visualize the artistic concepts he believes in. Frangieh always thought that “there is a charm in the imagery when one deals with a sequence of photographs.”

Time-lapse was one of the most direct applications of sequencing, since it introduces time and choreography. This very discipline pushes the “individual” photograph to abide by the dynamics of the “whole” and vice versa.

Alexy has many Time-lapse based works broadcasted on leading regional televisions in the form of channel bumpers. He is also a specialist in immersive imagery and giga-pixel imaging that are also forms of sequencing.

Alexy’s personal research is based on “Structure and Behavior.” The structure for the form and the behavior for the motion, both raise a challenge and re-question “rules of photography” if any.

He had designed many field-specific modifications to existing gear, besides; he had developed a long time-lapse device based on heavily modified Nikon cameras.

Alexy has made numerous installations and video artworks based on photographic capture.

Briefly, he thinks that “Nature hates Stillness” and “Life is in the Motion,” thus photograph or a still is a constituting element of a Work and never the Work itself. “After all it is the continuity of those stills that create the Motion,” he states.

Currently he is researching data-mining and artificial intelligence, and its creative possibilities when applied on sequences and large volumes of photographs.

He is working on a book that took one full year of fixed interval shooting. The book will consist of one frame but 300 scenes. 300 carefully selected captures, showcasing the singularity of both time and space and what lies beyond.