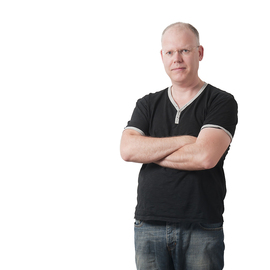 Born 1968 in New Zealand, by the time I was 6 I found that a steady supply of empty cigarette packets were a great place to draw, and I did to a large degree. Because these packets were small my sketching became quite detailed; which is the reason why for the rest of my life I was so obsessed with detail, often much to the annoyance of my friends. Now though not quite so much as age has brought, to a certain degree, the ability to compromise.

In 1977 we moved to Windsor England and I've lived in the area ever since.

In 1986 I can remember walking past a camera store and being fascinated by the cameras. It wasn't long before I had my first camera and yes you guessed it, an Olympus OM10. It wasn't too long before I had the mother of all systems; a Nikon F3 and all the accoutrements.

I acquired a passion for super field of view quite early on and was often taking multiple shots with just a 50mm and sticking them together to make photo montages or mosaics.

For a long time after I didn't touch a camera until about 2007, when I realised that with modern tech I could do everything and more that I always dreamed of doing back in the late eighties, early nineties.

The equipment I use is:

Canon 5D mkII with either EF 15mm or Sigma 8mm put on a Manfrotto 303SPH panorama tripod head then edited with a combination of Photoshop CS5, Autodesk Stitcher Unlimited 2010 and Pano2VR.

If you want to contact me, my address is bufftheowl@yahoo.com.