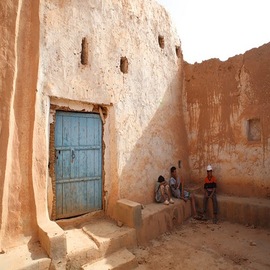 Diarna, “Our Homes” in Judeo-Arabic, is the flagship initiative of Digital Heritage Mapping, Inc., a 501(c)(3) non-profit specializing in digitally preserving historic and cultural sites worldwide. The project pioneers the use of digital mapping technologies to  explore the unfolding of Jewish history in the Middle East and North Africa through the prism of physical location by digitizing individual sites (schools, cemeteries, synagogues, shrines) and memories.

Anyone with an Internet connection can use Diarna to travel across the region as if on eagles' wings, unaffected by political and inter-religious strife below. Previously unknown or difficult to visit sites are now "visitble" via Diarna's weaving and synthesizing of satellite imagery, immersive panoramas, three-dimensional architectural models, archival and contemporary photography, scholarship, and oral history recordings.

Dirven by a team with diverse background and outlooks--including young Muslims eager to discover their shared history--Diarna has been: featured as a resource for scholars in the "Encyclopedia of Jews in the Islamic World" (Brill Publications, 2010); recognized as one of the 50 most innovative Jewish projects in North America by the Slingshot Fund (2009-2010); the subject of a panel at the Association of Jewish Studies' 42nd Conference; profiled in Haaretz (http://goo.gl/2N9VZ); and is partnered with Wellesley College, the Alliance Israélite Universelle, Beit Hatfutsot: The Museum of the Jewish People, and the Yad Ben-Zvi Institute.

The immersive panos published here are an advance preview of The Diarna Project's D'fina exhibit (http://www.JewishMorocco.org), dedicated to uncovering the "buried" or "covered" Jewish treasures of Morocco.

Spanning the entire country, from metropolitan centers to remote villages, D’fina proffers a virtual passport to visitors wishing to explore mountain-top shrines of Jewish “saints” that continue to be voluntarily protected by Muslim caretakers, scorpion-guarded genizot (burial grounds for holy texts and objects), anthropomorphic tombstones in seaside cemeteries, synagogues on the edge of the Sahara Desert, and ancient urban quarters with hidden reminders of their one-time residents.  This exhibit marks the first public showing of documentation on the majority of these sites, including several Vichy regime desert labor and “discipline” camps where hundreds of Jews and non-Jewish political prisoners toiled, suffered torture, and died during the Holocaust.

The Diarna Project
Al-Qoosh Shrine to the Prophet Nachum Interior

The Diarna Project
Al-Qoosh Shrine to the Prophet Nachum Courtyard

The Diarna Project
Tetouan Cemetery No. 1

The Diarna Project
Fes Cemetery No. 1

The Diarna Project
Tetouan Cemetery No. 2

The Diarna Project
Fes Cemetery No. 2

The Diarna Project
Al-Qoosh Shrine to the Prophet Nachum Interior

The Diarna Project
Al-Qoosh Shrine to the Prophet Nachum Courtyard

The Diarna Project
Fes Cemetery No. 2