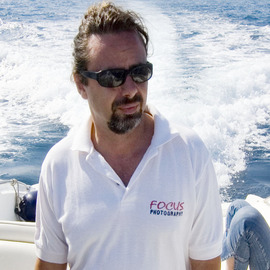 Ivan Aliverti escaped Milan and did his very first dive in 1991 with a camera in his hands and hasn’t been able to let go of it since. His diving career took him from Kenya, through Sardinia and the Maldives to the Red Sea, where he has worked for the last 14 years. He took his first picture when he was 14 and took his first underwater picture in 1992. Since then, he has been filming, taking pictures and winning competitions doing both. A real ‘Aliverti’ is more than just an image, he manages to truly capture the moment and convey to you the essence of his surroundings. www.360-images.com

Ivan Aliverti
Daniel is up to no good...run for cover!

Ivan Aliverti
Sunrise on the Princess Highway between Genoa and Eden

Ivan Aliverti
Phillip Island Nature Park, beach on the road to The Nobbies

Ivan Aliverti
On The Bridge, Brisbane

Ivan Aliverti
Phillip Island Nature Park, beach on the road to The Nobbies

Ivan Aliverti
Sunrise on the Princess Highway between Genoa and Eden