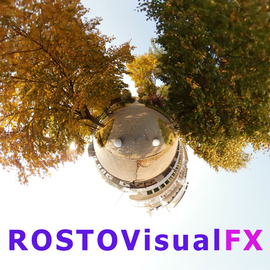 We don't do commercial photography and we are not interested in shooting as a means of income. We shoot beautiful scenic spots in Rostov-on-Don for the story and would be grateful to anyone who will give us a unique, beautiful place to shoot.

We mainly engaged in video shooting in 4K and spherical panoramas shooting less.

Our video Channel about Rostov-na-Donu can watch it on YouTube: ROSTOVisualFX

Beginners in Spherical photos can recommend our video tutorial on Erasure of the tripod in the Nadir (bottom panorama) and add there own logo.

Although this camera has a number of disadvantages. The occurrence of perspiration and condensation, through 15 shooting this is the worst drawback.

Also Gear 360 supports only a very limited number of compatible phones (SGS 6 and SGS 7 only). Although the camera can run autonomously without connection to the phone at all. But in this case You will not be able to change the settings of White Balance, exposure Compensation, ISO Limit, and also enable HDR mode. However, there is a solution, we had programmers, and they did a modified version of the application supported by older phones (SGS4 for example), as well as phones from other manufacturers (other than Samsung).