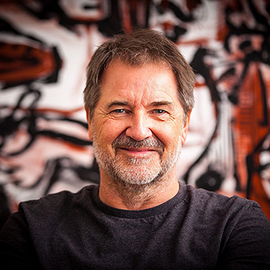 I have worked in the field of computers and digital imaging for the past 33 years and been involved in the evolution and acceptance of computer imaging from both a hardware and software perspective since joining U.K. digital pioneer Quantel in 1984.

During my time with Quantel, I was responsible for introducing digital technology to the arts and media industries in the U.S. from my base in Silicon Valley. I also travelled regularly to the U.K. to work with Qantel’s development team on the UI and functionality of what would become the industry standard of it’s time: the Quantel Paintbox.

In 1987, I left Quantel to start his own Hollywood based company, Electric Paint.  Employing this new digital technology I produced Key Art for major motion pictures including Edward Scissorhand, Terminator II, Teenage Mutant Ninja Turtles, Die Hard I & II, Silence of the Lambs, JFK & Born on the Fourth of July and album covers such as Michael Hutchence’s MaxQ, Nirvana’s Nevermind, Elvis Costello’s Spike, and The Beasty Boys’ St Paul’s Café.

In 2008 I merged Red Square’s business with local agency Webqem, allowing me to pursue my interest in travel, 360˚ panorama photography, and all things digital.

In 2012 I became involved with an Australian start-up company Mogeneration and its tablet publishing solution Oomph taking on the role of Creative Technologist.

I was recognised in the Australian Mobile Awards for my work in developing the award winning apps for Sky-OneCentral Park (Frost Design/Fraser Properties), Experience the Highs ( New England (NSW) tourism) apps and his 360˚ panoramic photographic contribution to the MCA Anish Kapoor app.

In 2014 I returned to my home city of Adelaide to focus on new technologies and ways of providing 360˚ Panoramic Photography, 360˚ Video and 360˚ Web & App services.