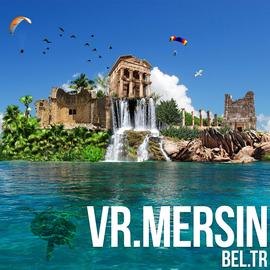 Cilicia and Mersin Cilicia Region roughly extends from the Manavgat River, through the southern foothills of the Taurus Mountains, to the Amanus Mountains. According to the geological structure, Cilicia is divided into two as the Rugged Cilicia (Cilicia Trachaea) and the Flat Cilicia (Cilicia Pedias ). The border between the Rugged Cilicia and the Flat Cilicia was the Lamos at times and the Soli at others. As it is known to those who toured around the area, there exist three gates that enable access to this land through a rugged course. The first of these is the Sertavul Pass, which is located to the north of Mut District. The second one is the Cilician Gate, which is known as the Gülek Pass and hosts a rock bearing the inscription “the Cilician Border”, and the last one is the Belen (Syria) Gate on the route to Hatay Province. Surrounded by Gazipaşa District of Antalya Province to the west, the provinces of Konya, Karaman and Niğde to the north and the Mediterranean Sea to the east, Mersin was annexed to the land of Ottomans in 1516 during the reign of (Yavuz) Selim I. It was then ruled by Kavalalı Mehmet Ali Pasha for some time, but later Ottomans gained control of the area once again. Mersin Province was founded in 1924. Districts of Silifke, Anamur, Gülnar and Mut were annexed to Mersin Province, and the Province was renamed as ‘İçel’. It is thought that the long-used “İçel” name derived from the name given to the site by Turkish people who settled in the areas located on either side of Göksu River during the 12th century, or has actually transformed from “Uç-il/ Uç-el” denomination used by Anatolian Seljuk Sultanate for this “Uç ülke, uç diyar (literally: the frontier land)” located beyond the Taurus Mountains. Erdemli district was founded in 1954; then followed Aydıncık District (1987), Bozyazı and Çamlıyayla Districts (1989). In 2001, the name ‘İçel’ was, once again, replaced by “Mersin” due to intensive pressure from the citizens. Having a Metropolitan City status, Mersin is divided into four central districts, namely Akdeniz, Toroslar, Mezitli and Yenişehir. Including Tarsus District, Mersin has 13 districts in total. MERSİN (Center) It was revealed in the excavations performed in Yumruktepe site that the history of Mersin dates back to 7000 BC. The settlement found on the northwestern part of the current City center flourished around 7000 BC, and continued to exist expanding even larger. Zephyrion, which is perceived as the antique settlement of Mersin, is localized somewhere between the Governor’s Residence and the Orthodox Church. Archeological findings gathered especially during the salvage excavations performed in the New Cultural Center constructed here and in the Old Public House garden, and the Kuros statute, which was excavated from the same area and displayed in Mersin Museum, are attributed to the Antique City of Zephyrion. The city, which was referred to as a ‘Polis’ during the Hellenistic Period and the Persian Period (and in later periods, as Hadrianapolis), was captured by Shapur I in 260 AD. While it was among the cities of Cilica I Region during the Byzantine Empire Period, it transformed into a prominent port city in the first quarter of the 19th century. There are numerous opinions and myths about the roots of the name “Mersin”. The most widely-known one derives from the ‘Myrtus-Murt-Myrtle’ tree, the yield of the Mediterranean Climate, which is called “hambales” by Arabs. According to another opinion, the name Mersin is inherited from the Mersin Tribe, which was one of the Turkmen tribes in history. In his Seyahatname (literally: ‘Book of Travel’), Evliya Celebi notes that he stayed in a village called “Mersinoğlu”, which is located on the northwestern part of the present-day Mersin. The Myth is as follows: The name Mersin came from the princess Myrna, daughter of the Cypriot King. Gods pitying Myrna, who had been cursed by the goddess Aphrodite, brought her ashore to Mersin. The place was named as Mersin because of that incident.
Copyright: Vr Mersin
Type: Spherical
Resolution: 14000x7000
Taken: 19/11/2015
Uploaded: 10/09/2016
Visitas:

Wojciech Fuchs
Killiney Hill
More About Turkey
The World : Asia : Middle East : Turkey
✖ It looks like you’re creating an order.
If you have any questions before you checkout, just let us know at info@360cities.net and we’ll get right back to you.
Cookies help us deliver great service to you. By using this site, you agree to the use of cookies. Leave this Site