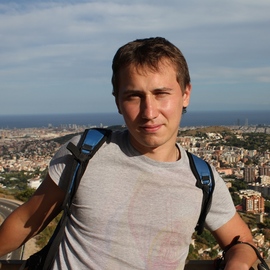 Andrew Usatyuk
The arch of friendship

Overview and HistoryMoscow takes its name from the Moskva river, where Slavic settlements began around 500AD. They adopted Christianity from the Byzantine Empire in 988 A.D., and it would last as the national religion for a thousand years.By the 15th cent. Moscow had become the capitol of the Russian state under the Grand Duchy of Moscow, which had been busily assimilating smaller feudal territories while battling the Golden Horde of Mongols. The city was raided and burnt down by the Tatar-Mongols at least three times.Consolidation of many smaller territories under Moscow's power set the stage for Ivan III to adopt the title of "Ruler of all of Russia." His son Ivan IV, or "Ivan the Terrible", become the first crowned Tsar of Russia.The succession of Tsars lasted from Ivan IV until Peter the Great, who proclaimed the Russian Empire in 1721, with St. Petersburg for its capitol.The Russian Empire survived the "Times of Troubles" which saw chaos, invasion and several uprisings of the people. Napolean Bonaparte came within 25 miles of capturing Moscow during his disastrous invasion of 1812, but was turned back after thousands of his starving troops were ambushed and killed by peasant guerilla fighters.By the beginning of the 20th Century, Moscow was capitol, this time of the largest country in the world.The Industrial Revolution came later to Russia than to Western Europe, partly due to Russia's institute of serfdom which kept peasants bound to the land. Soon enough however, the emergence of the Socialist political movement was loudly advocating total revolution, and by 1917 the Soviet Union replaced the Tsar and his autocratic rule. This began the Union of Soviet Socialist Republics (USSR), which lasted until 1991.After the collapse of the Soviet Union, Moscow continues to be the capital of Russia, or the Russian Federation as it is now known. It is still the largest single country in the world. People and CultureMoscow is in the grips of a western renovation, with consumerism and ostentatious displays of wealth parading everywhere. As of 2008 it is the city with the most expensive cost of living in the world, home of the most billionaires, as well as being the largest city in Europe. Getting ThereMoscow is laid out in five major sections in concentric pattern, with the Kremlin smack in the middle. The Kremlin is the administrative seat of power, and its name means "fortress." Its walls delineate the 15th century boundaries of the city. TransportationYou can find information about getting to and from the airports here . Click here for some great tips about the fantastic metro system Here is some more useful overview stuff about the metro, trams, trolleys etc. Things to doThere are many galleries and museums in moscow but here are two favorites:First is Modern Art Museum . and second is Winzavod - it means wine factoryIn addition to these, you can visit the Museum of Geology, Museum of Aviation and Astronautics, Museum of History of Moscow.For art lovers, try the State Tretiyakovskaya Gallerry - with a huge collection of Russian art and icons - one of the most famous russian museum after the State Hermitage in St.Petersburg.There's also a beautiful Zoo, comparing to others in russia.. As for restaurants and clubs there's nice cafe just near the red squre - F.A.Q. Cafe - if you can read russian.There's an old good club 'Propaganda' - it's almost 10 years but still one of the best places to go out every night! Others which are not bad are:  Ikra Solyanka Fabrique RecommendationsWhat to look for in general: Red Square, the Kremlin, the Lenin Mausoleum, the Cathedral of St. Basil, and Bely Gorod which is a shopping district.One more beautiful old place to see in Moscow is - Novodevichiy monastery (was built in 1524 and Ivan IV became a czar there).A good place to visit for outdoor activities is also Vorob'evi Gori (hills) - it's kind of recreation zone on the moskva river with a park and Moscow state university's main huge soviet building on the top.Another thing you can do is go for a walk down Old Arbat, a pedestrian street with ethnic flavour of Soviet times and buildings from the time of the Russian Empire.Text by Steve Smith.