Wiener Riesenrad from above
Vienna 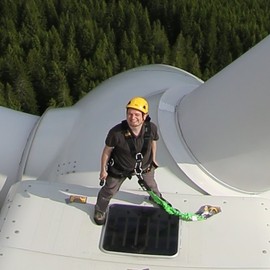 When my colleagues had to mount a camera at one of the cabins I used the opportunity to climb to the hub of this giant ferris wheel to take a panoramic photo. The so called Wiener Riesenrad is 65m (212ft) tall and was the world's tallest ferris wheel from 1929 until 1985. It's one of Viennas landmarks.