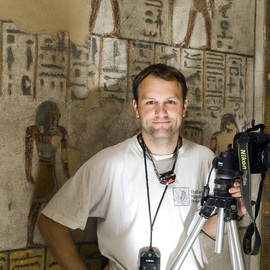 The tomb of St. Shenoute of Atripe, White Monastery, Sohag, Egypt. In 2002, the Egyptian Supreme Council of Antiquities (SCA) discovered and investigated a triconch funerary chapel at the White Monastery. Slightly off-center in the chapel nave is an opening in the floor that provides access to a pair of small subterranean chambers decorated with a stunningly well-preserved program of paintings. The walls of the barrel-vaulted passageway, antechamber, and burial chamber display a program principally featuring images of gemmed crosses, deer, gazelles, eagles, and peacocks, in a restrained palette consisting of ocher, light yellow, rose, cream, pale green, blue, and black. In the rectangular, barrel-vaulted tomb chamber itself; this visual program survives almost completely intact. Its fine state of preservation and traces of mortar at its threshold indicate that this interior space was sealed after the interment of the deceased. But at the time of excavation in 2002 the tomb no longer contained any human remains. The tomb was almost certainly built and decorated for St. Shenoute, who died in 465. Above the figures, a painted Greek inscription, “The (holy) shrine of Abba Shenoute the Archimandrite”, identifies the central figure as Shenoute. In architectural type and the iconography of the paintings it fits a late antique type of tomb found elsewhere in the eastern Mediterranean.The conservation and documentation project was funded by the American Research Center in Egypt. The overall director for the White Monastery Project is Stephen Davis - Yale Monastic Archaeology Project (YMAP). Elizabeth Bolman is the director of the tomb project, and Luigi De Cesaris, Alberto Sucato and Emiliano Ricchi directed the specialized work of conservation. Photograpy was done in December 2012. Shenoute of Atripe (346/7–465 c.e.)Shenoute was the first outstanding writer of the Egyptian language in its Coptic form, and his literary importance was never equaled. The ancient monastery of Shenoute is one of the most important historical sites, both for scholars and for the Coptic Orthodox Church. It was founded about A.D. 350 by Pgol, who was then succeeded by Ebonh. Its third leader was the great saint Shenoute, who led the monastic federation from A.D. 385 to 465. Shenoute’s name is now attached to this site. His miraculous life is recorded in an ancient biography written by his successor Besa. Shenoute assumed the leadership of his monastic federation in A.D. 385. As a monastic leader, he was a strict reformer of monastic moral life, an energetic administrator, a fiery preacher, and a great spiritual guide. He accompanied Coptic Pope Cyril I to the First Ecumenical Council of Ephesus (A.D. 431). He defended the poor and used the monastery to shelter refugees in time of crisis. He engaged in polemics against Christian heretics. He was an enemy of traditional Egyptian pagan religion in the region of Sohag and Akhmim — attacking it both by word and by deed. In Shenoute’s day, pagan temples began to be closed and dismantled, and their architectural members were reused in other buildings.

Courtesy of the American Research Center in Egypt, Inc.